The fists are tough, and resemble, to some extent, human fists. The three fingers of their ancestors were partly fused together for greater strength. Though they do not have distinct fingers, they do have distinct, large thumbs. These thumbs are used to buttress the fist, increasing the strength of their punches. The non-thumb areas of the fists even have internal cellulose-reinforced nodes at some points, much like knuckles. Fisticoats are roughly as dexterous as humans wearing thick gloves, with the fingers bound in one part and the thumb less restricted. 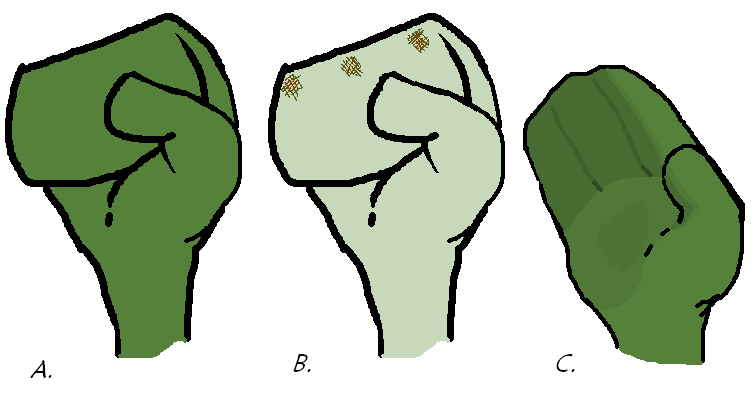 Fisticoats' thumbs are usually positioned in such a way that their hands resemble right hands. This is a genetically determined trait, with "left-handedness" being recessive. Their "handedness" also affects their tails. Most fisticoats have tails that curl to the right, matching their thumb positions. In adults, the tail curves only slightly to a particular direction, but in young fisticoats, the tails are so curly as to resemble pig tails. The wooden bones of young fisticoat tails are also softer and less developed than adult tails. This might be responsible for young fisticoats' tail regeneration ability: they can completely recover their tails if only 30% of tail tissue remains. This is a useful ability to have, since the butt-nostril is a common target for plent-eating predators and baby animals are ideal targets to begin with.

Baby fisticoats are not miniature versions of their parents. Other than their piglike tails, they have thinner 'wool', thicker and less protruding tusk 'gums', smoother and pointier tusks, wider-looking eyes, and less wrinkled tongues. Experimental modification proves that parent fisticoats provide more care to offspring that typify these traits. In other words, these traits are considered "cute" among fisticoats. The greatly curled tail seems especially cute, as fisticoats will experimentally "adopt" pigs with tails that resemble that of cute baby fisticoats'.

Despite their near-elephantine, lengthy and (apparently) loving parental behavior, fisticoats are not quite gentle giants. Among fisticoats, the solution to every problem is punching. This comes from their natural eating habits of shattering Darwin thornshells or boomsticks to obtain food.

As trivia, it is fairly easy to teach young fisticoats to punch colleagues when that colleague says a particular phrase. This is because mother fisticoats, when around food, may indicate that food to their offspring with a particular tooting sound. The young fisticoat then responds by shattering the indicated food. Though it's easier to teach a young fisticoat this trick, it's not impossible to teach an adult. Rather, it is not recommended because an adult fisticoat's punch is not only painful, but also strong enough to cause internal hemorrhaging.

Retrieved from "https://sagan4alpha.miraheze.org/w/index.php?title=Fisticoat&oldid=73881"
Categories:
Hidden categories:
Cookies help us deliver our services. By using our services, you agree to our use of cookies.