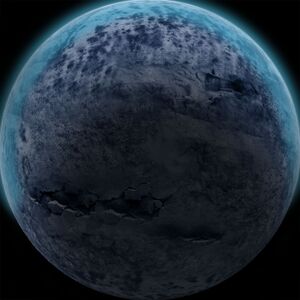 Mason is Sagan 4's only moon. It has a thick atmosphere (Titan-like) and no life on it (until the Bloodian Period).

Mason is a cold, foreboding world, as frigid as it is lifeless. It is composed mostly out of water ice and rock debris, and possesses a rocky core.

Like one gargantuan glacier, a single sheet of glacial ice covers the planet, precipitated by the little evaporation that does occur thanks in part to a slight heating caused by the moon's thick yet virtually transparent atmosphere. What ice does melt and evaporate can make it into the upper levels of the lower atmosphere, where it can quickly cool and return to the surface as either snow or ice crystals.

Plate tectonics have been known to occur, but Mason has seemingly died in more geologically recent times, although it is possible that they have instead only calmed down to a fraction of their former activity.

These movements helped cause the massive trench-ravines that dot the surface - the largest of these can be seen even on the surface of its mother planet, Sagan 4. What was initially craters caused by large asteroids striking the surface was facilitated by the tectonics, resulting in great expanses of surface ice buckling and crumbling into the abysses subsequently created. The largest of these trenches, occasionally nicknamed "the eyes of Mason" or "Mason's stare", extend so far below the regular surface that general scans cannot judge its actual depth. It is possible that this trench drops all the way to the moon's mantle, although it is unlikely that it drops as far down as that. But they do appear to still be massively deep. Depending on the thickness of the glaciers, they could be miles upon miles deep.

The old tectonics of the world have also caused massive mountains to be raised, upon which large formations of clouds dash themselves, constantly dropping great amounts of snow and ice upon them every year. This growth is enough to keep the glaciers upon these ranges as a permanent feature, like the rest of the world.

Significant cloud cover does not form often due to only minimal amounts of evaporation, and also due in part to the wind routes, which can disperse what exists of clouds over larger areas, making the existing evaporatory substances far less prominent in the skies above.

Lightning storms are quite rare on Mason, but have occurred in the past. These storms can be brilliant in color, thanks to the abundance of noble gases in the atmosphere. Lightning therefore has been known to cause the local area to glow purple or even bright blue for a split second when the atoms are excited by the electrical discharges. As stated before, however, this is a rare sight.